Memphis woman started a GoFundMe page to ask for donations after she says she spent all of her money buying Powerball tickets for the record $1.5 billion jackpot.

The woman named Cinnamon Nicole, says she spent all of her money expecting to win the jackpot, despite having a 1 in 292.2 million chance of winning.

Some are questioning if the account was part of a scam. Is “Cinnamon Nicole” a real person?  GoFundMe has shut down the account.

Please help me and my family as we have exhausted all of our funds. We spent all of our money on lottery tickets (expecting to win the 1.5 billion) and are now in dire need of cash. With your small donation of at least $1.00, a like and one share, I’m certain that we will be able to pick ourselves up from the trenches of this lost and spend another fortune trying to hit it big again! PLEASE, won’t you help a family in need. DONATE NOW. 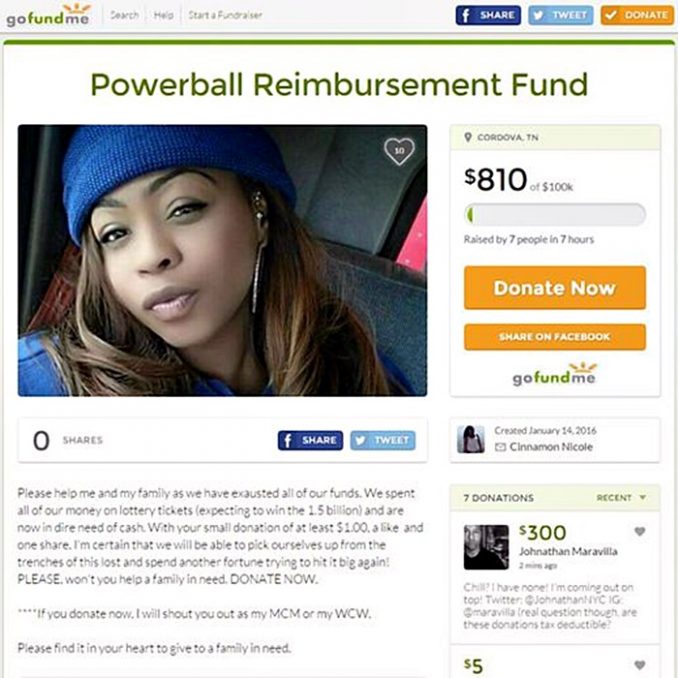 According to PIX11, In exchange for a donation, like, and share, Nicole promised to make people her #MCM (Man Crush Monday) or #WCW (Woman Crush Wednesday), Nicole’s efforts raised more than $800 in just seven hours.

However, on Friday morning, GoFundMe confirms they shut down the account.

GoFundMe Media Director Kelsea Little told PIX11 in a statement, “The campaign in question was removed for a violation of GoFundMe’s Terms & Conditions.”

It is not clear who set up the GoFundMe account. Someone may be impersonating “Cinnamon Nicole” in an attempt to scam donations from sympathetic readers. No one has been able to contact the mystery mom for a comment.