The quickest way to a panic attack at an airport is popping your luggage on the scales and seeing it go over the limit.

The fees can be massive – up to $1000 (or more!) depending on which airline you’re traveling with and how far over you’ve gone.

This is especially common for budget airlines, whose staff often ask passengers to remove jackets or heavy items from their bags and carry them instead.

This is what happens to Texas couple Jared and Kristi Owens were headed for Las Vegas but hit a snag when they were checking in at the Lubbock airport, due to overweight luggage.

In a very bizarre event, they found their dog hiding inside their luggage bag causing it to be overweight.

Here’s what they said during their interview via KCBD-TV:

“They put it on the scale and this bag is basically like 5, 5-and-a-half pounds overweight.”

“So really quick we’re like, ‘Oh, we’ve got to rearrange some stuff.’”

As the couple opened up the suitcase and rummaged around, they found the reason for the few extra pounds. 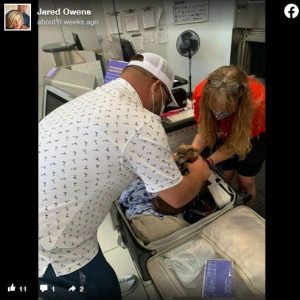 Their chihuahua named Icky had managed to sneak into their suitcase and had been hiding out. Pet owners make jokes all the time about their pets knowing what suitcases mean and about “smuggling” their animals with them on vacation, but it’s rare that it happens.

And though Icky doesn’t weigh much, it’s mercy she tipped the scales on that day or something horrible could have happened to her, a fact that her owners acknowledge and that made them all the more thankful they found her when they did. 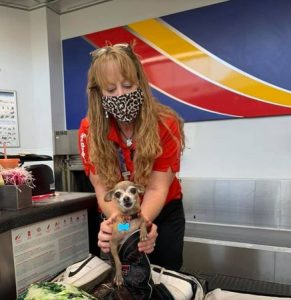 Southwest is known as the airline with a heart, and employee Cathy Cook certainly illustrated that by offering to watch the pup for them.

“They have got a heck of an employee in Cathy,” Jared said. “She went above and beyond and never made us feel, you know, they could have turned it in, we were trying to smuggle a dog to Vegas or something. Never acted like that, they were extremely gracious. Like I said, she was willing to watch our dog for us while we were gone.”

Thankfully they didn’t have to take Cook up on her offer, as family nearby came to retrieve the travel-seeking dog and the Owens were able to go on their trip.

“You know it’s going to be an epic trip to Vegas when you get to the airport to check your bags….6lbs overweight, and out pops a chihuahua from your boot!!” Jared posted on Facebook on Sept. 26. 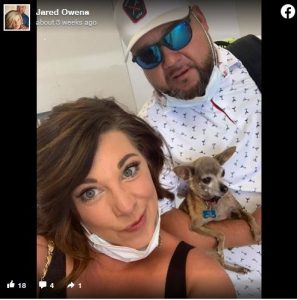 “Unreal! Let the shenanigans begin!! Shout out to Cathy with #southwestairlines for her awesome customer service!! She offered to watch Icky until we got back!! Let’s go!!”

Now the Owens know to double-check their bags before setting off, as they might have a repeat stowaway.

“She’s the burrower, that’s what she does,” Jared said. “She burrows in clothes, she burrows in, obviously suitcases now.”