A woman who was kicked out of the pool because of inappropriate outfit has gone viral on social media.

Tori Jenkins, says she was at her apartment complex’s pool with her fiancé when she was told that her swimsuit was inappropriate. She was being rejected from her apartment building’s communal pool for wearing a one-piece.

“She basically told me that if I didn’t have kids, I wouldn’t understand. If her kids were at the pool, she wouldn’t want me in that swimsuit, how inappropriate I looked, and then she told me that there were a lot of teenage boys at the complex that I don’t need to be exciting,” Jenkins told WATE.

She was given the option to choose of either changing her swimsuit, putting on shorts or leaving the pool.

‘Today my fiancée was faced with either changing her bathing suit, covering up with shorts, or leaving the pool that we paid a $300 fee to maintain on top of a monthly rent of nearly $1000’ he wrote.

Why? Because her body is apparently so curvaceous that it’d send the young boys already at the pool wild.

And that, apparently, was her problem – not theirs.

After talking about what to do, Tori then went to discuss the matter alone with the leasing consultant who insisted on taking photos of her to show how inappropriately dressed she was and was told that she didn’t understand the problem because she didn’t have kids.

Tori Jenkins’ fiance took to Facebook to call the apartment complex out on their ‘sexual harrassment and/or “rape culture”‘. 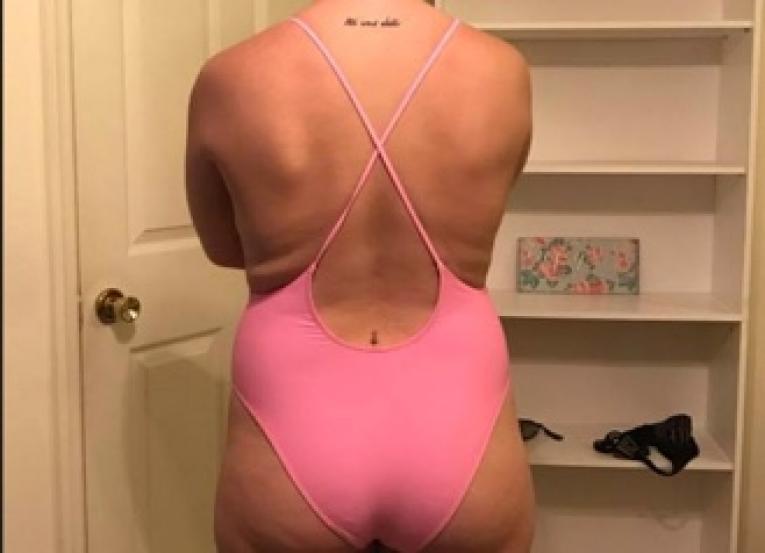 ‘Tori was accused of wearing a “thong bathing suit” and told there were complaints about the way she was dressed after roughly 3 minutes tops, of us arriving there.’

Tyler Newman, Jenkins’ fiance, says an employee suggested taking photos in order to help her understand why some people were offended by her outfit.

And that led Tyler to conclude that ‘Tori is less important than a man’s urges to be sexual towards her.’

The apartment complex denies asking her to leave the pool, but says there were multiple complaints about her swimsuit.

“Smoky Crossing is a welcoming family community. Multiple residents within our community complained and expressed concerns regarding Ms. Jenks’ swimwear. In accordance with our pool policies, which are posted near the swimming area, one of our leasing consultants requested Ms. Jenks wrap a towel around herself when she was walking around the pool.

Ms. Jenkins was never asked to leave the pool. In addition, our leasing agent did not state that Ms. Jenkins swimwear would ‘excite teenage boys.’

Ms. Jenkins and Mr. Newman are valued members of our community. However, we feel it is inappropriate to equate requesting Ms. Jenkins to cover up with sexual harassment or ‘rape culture.’ Smoky Crossing denounces harassment in all forms,” a statement from Smoky Crossing read.

‘I think she’s the most beautiful woman in the world, but I also respect her. I would never make her or any other woman feel less than what she’s worth because of her outfit or her looks. This is how rape culture continues to grow.

‘MY POINT: My fiancée being told she should cover up on a 90 degree day in our own apartment pool because she will “excite teenage boys” is bullshit. I will not stand for this. My fiancée should be able to wear a bathing suit without being sexualised and demeaned. She shouldn’t feel violated. I will make a live video of my personal opinion and reasons why this is unnecessary soon.’