Folks, I spent four years in the military and at the end of it all whenever I chose to I could go to college.

Hell, it’s been years since I got out of the military and if I wanted to start college now I could. However, if I did I would likely enroll in online courses due to the fact that I would probably run screaming from a college campus after a half a day because of all the liberal bullshit that gets spewed out on a daily basis.

The University of Colorado at Colorado Springs apparently approved the posting of a newsletter around the campus that calls for the banning of U.S. military veterans from attending four-year colleges and universities. 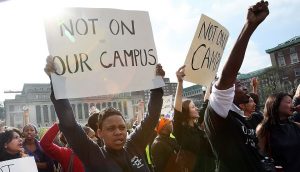 Now the school is trying to wiggle out of it. As reported by Colorado Springs CBS affiliate KKTV, the newsletter also compares U.S. military culture to that of white supremacist groups.

The newsletter, titled “Social Justice Collective Weekly,” reads: A four-year, traditional university is supposed to be a place of learning, of understanding, of safety and security. However, there is an element among us who may be frustrating those goals: Veterans.

UCCS is known for its number of veterans who are full and part-time students. But these veterans of much the school prides themselves on may be hurting the university. [sic]

But the problem lies in their socialization into the military culture that is that of a white supremacist organization. They have been permanently tainted, and are no long fit for a four-year university.

The flyer also claims “students are frightened by the presence of veterans in their classrooms,” particularly members of the “LGBTQQI2SAA” community: Veterans usually have an overwhelming presence in the classroom, which can distract other students. This is usually true for vulnerable individual such as LGBTQQI2SAA, who have been known to be the butt of insensitive jokes made by veterans. Then it was back to connecting dots between veterans and “right-wing groups”: Finally, veterans usually are associated with extremists right-wing groups such as the tea party and the NRA. In order to provide a safe place for all students, extremist right-wing groups must be suppressed on campus. This would include their followers: veterans.

Reddy said the university “vigorously rejects the offensive viewpoints expressed in the flyer,” and defended military veterans as “positive and valued members of our academic and campus community.”

The chancellor also said the university “rejects the notion that we should censor those who denigrate others, as censorship would have silenced many voices over the decades who needed to be heard.”

One wonders if the chancellor and his colleagues extend the same belief to Confederate monuments and white nationalist groups, but we digress. Blogger Paul J. O’Leary, an Army and law enforcement veteran responded to the newsletter on Friday. In a lengthy post titled “An Open Letter to a UCCS Student,” he wrote, in part:

Isn’t it wonderful that we live in a country where all of us are free to express our opinions in a public forum? Where we are all free to pursue educational excellence? […] Why do you feel it is acceptable to minimize the safety and well-being of those who attend trade schools? Are you assuming there are no LGBTQQIP2SAA students going to trade schools? Do you feel they are somehow less deserving of a safe and flourishing educational environment than their peers in the traditional four-year universities?