A woman had emergency surgery after a seven-inch adult toy became lodged in her anus. Emma Phillips, 24, was with 29-year-old partner, Lee Miller, when the pink toy disappeared, Daily Mail reported. Phillips thought Miller hid the the toy until she pressed down on her stomach and realized the toy was inside her.

“We were looking around the bed in case it had fallen out,” Phillips said. “When I leaned on my stomach I could feel it vibrating – it was stuck low down and at one point was even wedged behind my hip.” The couple tried removing the toy on their own to no avail.

“For a while Lee was suggesting all kinds of wonderful options. He tried a kitchen fork handle, which we won’t be using again, and said he could feel it at one point but that it was too far up — it was a goner”, Phillips explained. “He tried BBQ prongs too but after a certain point — after an hour of trying — we knew were going to have to go to hospital. We were both a bit shocked,” she continued.

Phillips took to Facebook to share her story. “When a bit of Saturday morning playtime results in spending the day in Wrexham hospital having a nice pink [adult toy] surgically removed from your bowel areas…. whilst it’s still vibrating,” she wrote. “If you can’t on a Saturday when can ya?”

When the doctors X-rayed Phillips, they decided the toy was too far up to remove without sedating her. “I think at that point it started getting quite serious,” she recalled. “The doctors were really good — they all moved quite quickly and were so reassuring telling me they saw it quite often which was quite a relief. At first we were jokey about it but then [realized] it wasn’t much of a joke especially when there was talk of going through my stomach if they couldn’t get it.” 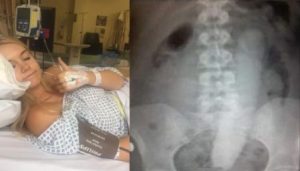 Doctors informed Phillips that if they couldn’t extract the toy from her bottom, they would have to go through the bowel, which could mean months with a colostomy bag. The surgery lasted about a minute-and-a-half and doctors were able to successfully remove the toy. They offered her the toy as a keepsake, but Phillips declined. She was discharged later that day and went home to see her 2-year-old daughter.

“I just took some painkillers and was told not to use stuff like that again until I was ready,” she said, according to The Sun. “I’ve learnt that I’ll need to be a bit more careful in the future.”

“We weren’t going to do anything about it because of the embarrassment — there’s a big taboo about it — but we knew we needed help,” Phillips added. “I want to say a massive thank you to the ambulance crew and Wrexham Hospital staff who were really good, really reassuring and non-judgmental. “There is a big taboo about this, but it really isn’t a big deal,” she added. “You hear about people becoming really ill or even dying because they’re too embarrassed to get help — I would hate that to happen to someone.”