A woman who was tortured and beaten by her ex-fiance for hours in front of her children could face jail time if she refuses to write him letters in prison updating him on the progress of their children.

Natalie Allman, 29, was ordered by a judge to update her ex on their children regularly, and would be held in contempt of court if she refuses to do so.

Allman’s five-year-old twin sons were just two when they witnessed their father, Jason Hughes, viciously beat their mother with weight-lifting dumbbells, cut her throat with a Swiss Army knife and attempt to suffocate her with a pillow. Allman said she and Hughes had been separated for a while at the time of the incident, which occurred in February of 2012, but he was staying at her house until he could find another place to live.

“He’d never been ­aggressive before, just controlling and he drank too much. We’d been separated a few weeks but he was still staying in the house until he found somewhere else,” she said. “I woke up in the middle of the night and he was kneeling over me, beating me repeatedly in the face. At first I thought he was punching me and then I realized he was using his weights. He was smashing them into my face over and over. There was blood everywhere but he didn’t stop. It was midnight and then the next thing I knew I was coming round and it was 3am. I don’t know whether I fell asleep or was knocked unconscious.”

According to reports, Hughes attacked Allman two more times throughout the course of the night, and tied her up to prevent her from getting away. Allman managed to call police around 7 a.m., and police soon arrived to find the couple’s twin sons, Ethan and Timmy, in bed with their mother and covered in her blood. Allman miraculously survived the attack, with the knife just missing a major artery. 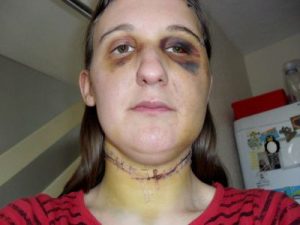 Hughes was sentenced to nine years in prison for the attack, according to Daily Mirror.

Last January, Hughes’ lawyer sent a letter to Allman demanding that she send six letters a year updating him on their children, and give him phone calls with them on birthdays and holidays.

“I got a ­letter asking for six letters a year and phone calls on their birthdays and at Christmas,” Allman said. “I never thought for a second that he would be granted any contact after what he did. I tried not to think about it. It seemed so unlikely anyone would take his side over mine. But he put the ­application in and then just before Easter last year I got asked to go to court.”

Due to a UK law that gives Hughes the right to have contact with his sons (Residence and Contact Order under Section 8 of the Children Act of 1989), Allman now has no choice but to comply or else she faces jail time.

“I read the order and felt sick that I was going to have to ­communicate with that man after what he did,” she said. “I wanted to just ignore it and get on with my life with my boys. But then I read the notes at the end. They said, ‘If you do not comply with this contact order you may be held in contempt of court and be committed to prison or fined.’ I couldn’t believe it. I could end up being split up from my children and sent to prison when he was the one who ­attacked me. I’m the one being treated like a criminal.”