A mother leaving her 2-year-old daughter in the care of a Muslim for just 10 minutes became the greatest regret of her life.

The 2-year-old girl was left by her mother in the care of her acquaintance, Nisar Ali, 34, because she needed to attend something for a while. Upon return of the child, she was not as good as before – perhaps she can never be like what she was back then. 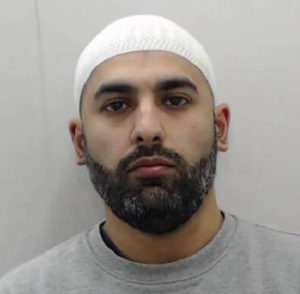 He was “vicious” as the mother’s description on Ali when he dropped the girl off in his vehicle without saying a word.

Ali was believed to have mercilessly beaten the child in an inhumane manner as he left the child disabled.

It was found out that the child collapsed at home in Rochdale, Greater Manchester and was found to have suffered 30 injuries including a fractured skull and a bleed on the brain.

She was rushed to the hospital and underwent emergency surgery at Royal Manchester Children’s Hospital where she had to have part of her skull removed to relieve pressure from her brain.

Unfortunately, the little girl was left with brain damage and will be disabled for the rest of her life. The doctors said that she would look like a person who has suffered a severe stroke. Another expert explained how brutal were her injuries which can be compared from a person who fell on a 2-storey building.

Minshull Street Crown Court, Manchester heard in the run up to the attack on January 11 this year, Ali had collected the child from her mother’s house but it is thought he lost his temper with her at a nearby park and then attacked her at his parents’ home.

Ali later denied wrongdoing but was convicted of intent to cause grievous bodily harm following a trial at Minshull Street Crown Court, Manchester and jailed for 14 years.

Passing sentence Judge Tina Landale told him when he would be released 2036.

He said: “This is a grave crime, the evidence which the jury heard provided a chilling insight into your character and sense of morality and humanity.

“Before this incident, the child you injured was a very bright, delightful, happy child with all of her future ahead of her. She had a loving family, a devoted father, a loving sister, a wider extended family.

“Your defense was that you had not caused any injury and had no knowledge how she came to be so gravely ill – but the evidence in the trial showed you to be a manipulative man.

“It may never be known what you did to her but something happened at the park when you took her there. You were away from the mother for a period of 10 minutes. It’s most likely you took the child into your parent’s house where you attacked her.

“It must have been a ferocious assault on a defenseless two-year-old child. You have a short temper, you don’t tolerate independence of mind, you have strict ideas about how children should be brought up.

“The child suffered 30 deliberate injuries, three were life threatening head injuries, a fractured skull, the force required would be consistent with a fall from a second story building. She was also shaken so badly her injuries were equivalent to a car accident at 70mph.

“She became immediately unwell, in an act of cold calculation and self-preservation you chose not to tell her mother, you drove her back and left her there. When the mother became aware that she was making groaning noises you pretended not to know why.

“You displayed no concern for the child in the aftermath. The excellence of the highly qualified and dedicated team of doctors saved her life but the consequences have been life changing for this little girl. Her left side doesn’t work normally and she appears as though she had has a stroke. This is a permanent disability and it is likely to need life long help.

“She will never achieve her potential she would have had without the head injury. You have deprived her and her family of the future they were hoping for her. It also harmed many others – her family are left to grieve for the child they knew.

“You have shown no remorse, this was a pattern that was going throughout the day. You have a vicious streak, and you have an explosive temper and you quickly lose control of yourself. You demonstrated extreme violence towards the child and you are a dangerous offender who poses a significant risk of causing serious harm to others.”

Earlier the girl’s father, a businessman said in a statement: “Words cannot describe what I’ve been put through by this one inhumane person. The 11th January is one date I will never forget. At 17:35 when my ex-wife called me to say my little girl was not breathing.

“My daughter was lying there lifeless I couldn’t believe my eyes. I looked at the bruise on her right forehead. I had to leave early because it was snowing. The nurse said she was very critical and by the time I came back she might not be here.

“Seeing her like that was heartbreaking, I made myself strong for my daughter. Her sister has been mentally traumatized and asks when she will be normal. She has done better than expected but will still need to wear a helmet she can’t see in one eye and can’t move her left arm.

“My daughter will never be the same, the actions of this one inhumane person has caused my daughter her future. I will do my best to give to her what’s been selfishly taken from her. Mr. Ali will be out of prison one day but my daughter still needs a head operation. No sentence can justify what’s happened regardless of the length.”