Colin Kaepernick, former quarterback for the San Francisco 49ers, has dominated not just sports news, but mainstream headlines since last year, when he began infamously kneeling during the National Anthem to protest police brutality and racial injustice in the United States.

However, without a doubt, Kaepernick’s most ardent supporter is his fiancé, MTV DJ and “Teen Mom” host, Vanessa “Nessa” Diab. It is confirmed the two will have an Islamic wedding, and there is also much speculation that Protestant-raised Kaepernick has converted to Islam.

Diab is a 36-year old American-born Muslim who has stated that she follows “authentic Islam.” She wears short skirts, no hijab, and lots of make up; but her seeming Americanization is weak cover for her Islamic Supremacist and un-American viewpoints.

Between Kaepernick’s anti-American protest and his Muslim fiancés activism, it was only a matter of time before sharia siren Linda Sarsour latched on.

Sarsour has long been a supporter of Kaepernick’s actions, and last week she spoke at the Justice League NYC and Color of Change rally after no team picked him up for the 2017-18 NFL season. The “I-don’t-understand-what-personal-accountability-is” left believes the NFL not signing Kaepernick (who opted out of his 49ers contract on his own volition this past March) is because of white supremacy. The rally’s organizers called for a boycott of both the NFL and its main sponsor, Verizon Wireless, if Kaepernick is not given a spot in the NFL by the start of the season. 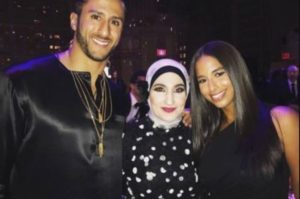 Kaepernick and Vanessa Diab together with Linda Sarsour.

During the rally, Sarsour called for people to rise up against “right-wing Zionists,” and went on to state that “we want you to know that we will not be silenced by ‘blue lives matter,’ by white supremacists, by neo-Nazis, by right-wing Zionists.” She wasn’t finished with her hate-filled anti-Jewish sentiment; she also stated: “People are not like us. The powers that be do not care about morality, or integrity, or dignity, or respect of our communities. They only speak one language, and the language is money,”