Left-wing activists groups like BLM, ANTIFA and the Democrat Party are telling donors to Hurricane Harvey relief efforts not to give to the American Red Cross or other groups carrying out rescue efforts. Instead, they want everyone to contribute to left-wing causes which have done little or nothing to help the hard hit area. Their despicable action comes while Right-wing groups like TITFF, III%er’s and the Cajun Navy have responded by the thousands to provide help, food, water and rescue services to the people at their own expense. 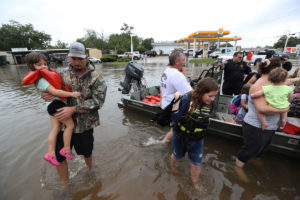 The sweetheart of the Left-wing lifestyle, Linda Sarsour, a prominent Muslim activist, sent a tweet encouraging donors to give to the Texas Organizing Project Education Fund. But she didn’t say is that the money will not be used to help the people, but will finance “direct action organizing, grass-roots lobbying and electoral organizing efforts in Texas.”

Ms. Sarsour said in a Wednesday tweet that included the #NoRedCross hashtag, “TOP is one of many organizations on this list you can choose to support” . “Grassroots orgs on ground. Long term needed.”

The TOP group has fought Texas voter ID laws and supported sanctuary-state status. It is one of the so-called Hurricane Harvey Community Relief Fund, a coalition that includes labor groups such as the SEIU and Texas Rio Grande Legal Aid which provides legal aid to Illegals being deported.

Meanwhile, conservative sites like Twitchy have attacked the Left-wing attempt to capture funds under false pretenses Tweeting; “DISGUSTING: Linda Sarsour is soliciting donations for a liberal political group masquerading as a Harvey relief fund,” and the Federalist’s Sean Davis called it a scam.

A few of those listed, like Feeding Texas and SHAPE Community Center, are involved in providing immediate needs such as food and shelter. But the rest of the groups are primarily Left-wing Activist groups and have no relief efforts planned or underway.

Personally, I am not a huge fan of the independent, Congressional chartered organization, Red Cross for personal reasons. It relies on private fundraising as well as government grants for its $2.8 billion budget either. But they do a lot of good work especially feeding and housing persons during disasters.

The real question is whether the Houston Democratic Socialists are capable of doing a better job on the ground than the Red Cross? And frankly that is highly debatable. Meanwhile, it has been the Militias, and Right-wing Veterans political groups that have stepped up to fill the early void for the devastated residents of they area using their own resources to save lives and feed people.

It was not Back Lives Matter or black-clad ANTIFA thugs or even the Black Panthers or Democrat Party that were in the early photos coming out of Houston rescuing survivors from flood waters. It was real Trump supporting Nazi Fascist Americans helping other Americans regardless of Race or Religion at their time of need.

Even our supposedly Fascist President stepped up yesterday pledging One Million dollars of his personal wealth to help the people of Houston, regardless of their color or political affiliation. As for me, I will continue to support the efforts of our Veterans groups as they fill yet another semi-trailer bound for Houston, the fourth one this week just from Florida. I encourage you do do the same. You might even consider joining one of these groups and help provide services to your community and others in need.